Last week, Nifty gave an emphatic Supertrend Sell signal on a weekly chart after it closed at 16658, well below the Supertrend value of 16948. As we described in this youtube webinar and this blog post, this was the first Sell signal after the Supertrend Buy signal that it gave in the week of 10th July, 2020, that resulted in a bull market that lasted almost 18 months. 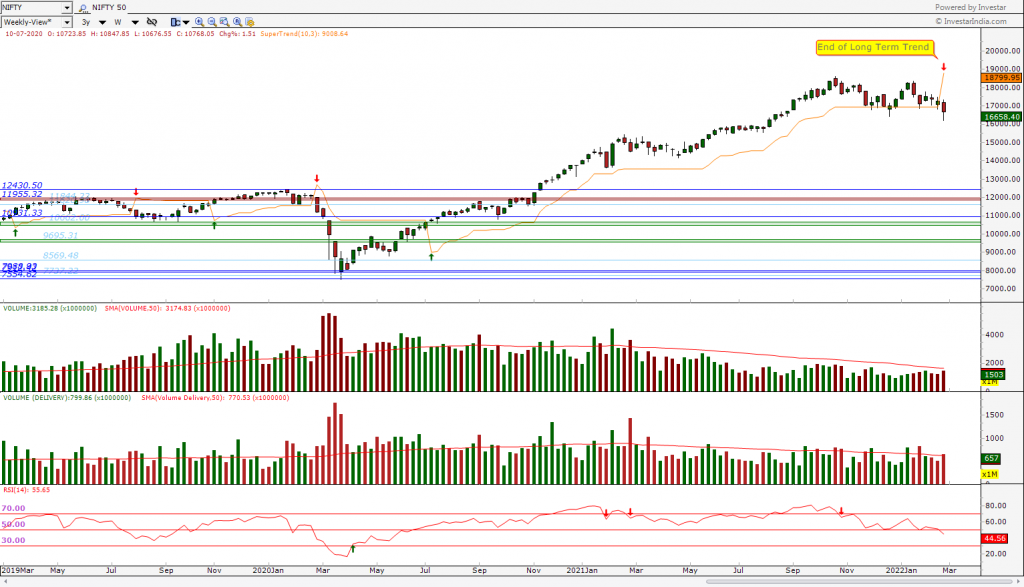 There are several reasons why this could indicate the end of the bull market that we have known for the last 18 months:

1. Nifty has had several corrections in the last 18 months but in none other case did we get this signal.
2. Supertend tends to be a pretty strong support in an uptrend. Since Nov 21, Nifty also tested the 16948 level multiple times and then finally caved in last week, also giving us more confidence that this could indeed be a strong indicator that the bull market has ended.
3. Overall, a lot of stocks are in correction mode.
4. Global macroeconomic factors like US inflation leading to a more hawkish fed and higher interest rate environment.

Although it may not necessarily indicate a bear market or recession, the end of the long-term uptrend in NIFTY atleast indicates that if you are a long-term investor, it is a good idea to raise some cash by taking some profits, so that in case there is a major correction, you have enough ammunition to again invest if the favourite stocks you wanted to long-time invest in corrected a lot!