Often times, I find traders use technical indicators and follow their Buy/Sell signals blindly, without really understanding how that indicator is to be used. One of the first thing you have to know when you use an indicator is to know what category it falls in. The majority of indicators out there are either the oscillating or trending type.

Trending indicators are typically drawn on price charts itself and usually fluctuate along with price movements (they can be used on another oscillator too but we’ll keep it simple here). Moving Averages are the best examples of trending indicators (e.g. an Exponential Moving Average or EMA for short). A moving average, as the name suggests, takes a moving average of closing prices and plots it on the price chart. e.g. an EMA(5) on an hourly chart will take the moving average of the last 5 hour bars and plot it on an hourly chart. Trending indicators like EMA are called lagging indicators because the Buy/Sell signals they generate generally lag the price action, meaning that a change in trend in price shows up in the indicator a little later. As you can see in the chart below, when Nifty changed to a downward direction, it was captured by the 5-20 EMA Crossover a little later (as indicated by the sell signal), hence it is called lagging. 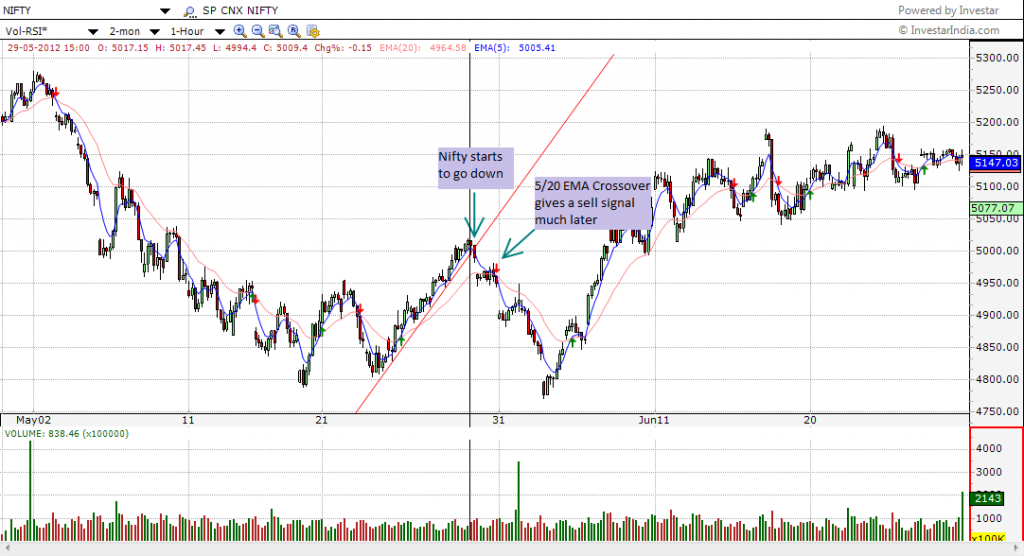 On the other hand, oscillating indicators or oscillators as they are called are plotted in a different area than the price chart and their values usually fluctuate above and below a center line or between an upper and lower level. Oscillators are also called leading indicators because the signals they generate are ‘leading’ and serve as an advance warning of a trend change or something similar that is about to happen. Examples of oscillators are Relative Strength Index (RSI), Stochastics, MACD, ADX etc. In the Chart below, you can see that the RSI fluctuates between 0 and 100 and Investar shows a sell signal when RSI goes below 70 and a buy signal when it crosses above 30. Another important point to note is that the the sell signal generated by RSI is almost at the same time that the Nifty started to go down and this is what is meant by the ‘leading’ behavior of RSI. 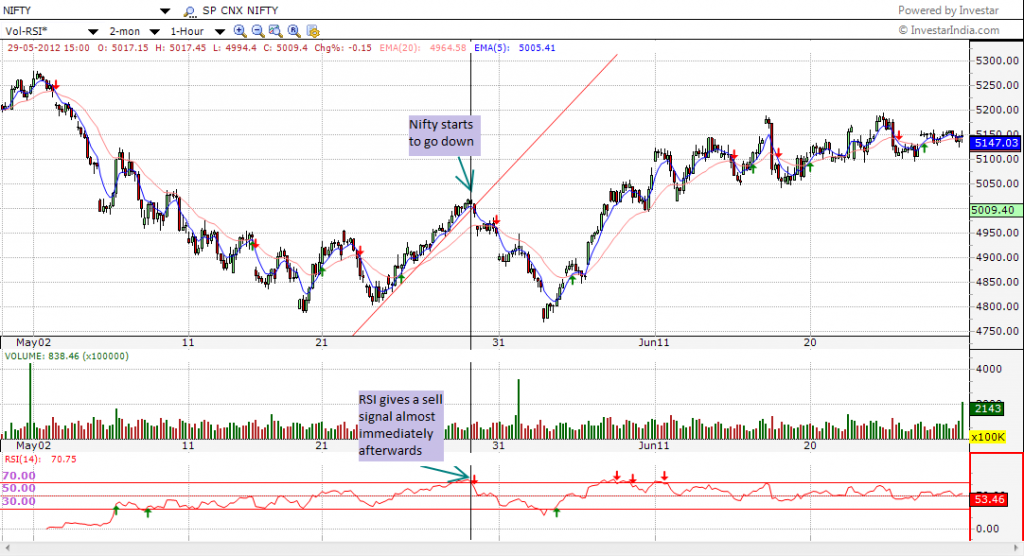 8 Reply to “About Oscillating and Trending Indicators”