A lot of times we at Investarindia.com get questions like:
1) Which Moving Average parameters should I use to get the best results?
2) What parameter should I use for XYZ indicator.

The first myth we would like to clear up is that there are no so called ‘golden’ parameters which will work well at all times in the market. But, nonetheless, this post shows that choosing the right indicator parameters is always a tradeoff between different goals and tries to explain the scientific rationale behind the same.

To understand the rationale though, we need to understand that the first parameter of any indicator is generally indicative of how many data points or bars (e.g., daily, 5-min, 1-hour bars) are considered in the formula for that indicator. Generally speaking, hence, smaller the parameter, smaller are the number of bars. Usually, the smaller the parameter, the more faster moving will be the indicator, and hence it will generate more signals (both true and false signals). e.g. An EMA(5) will be faster moving compared to EMA(20) as it averages only 5 data points compared to 20 of EMA(20). e.g. RSI(14) uses 14 daily bars in a daily chart and 14 5-min bars on a 5-min timeframe chart.

So the question to really ask is how fast you want the signals to be generated. Too small a parameter, and it may generate too many false signals to be of any value.

Let’s take the example of moving average crossovers to understand this. A 10-50 EMA crossover will be slow to give Buy/Sell signals and will in general give less buy/sell signals and hence also less false signals compared to say, a 5-20 EMA Crossover. The figure below shows an example of a 10-50 crossover on a Nifty hourly chart. As we have seen in an earlier post, moving averages work best in trending markets and give false signals in sideways markets. As can be seen in the figure below, the 10-50 EMA crossover is a little slow to give signals and can result in late signals; but also gives less false signals overall in a sideways trend. 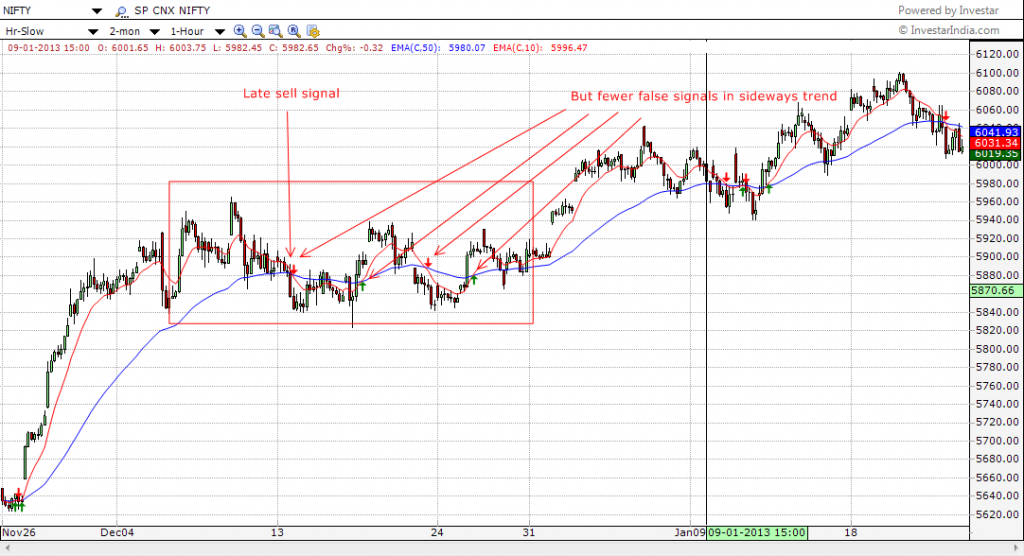 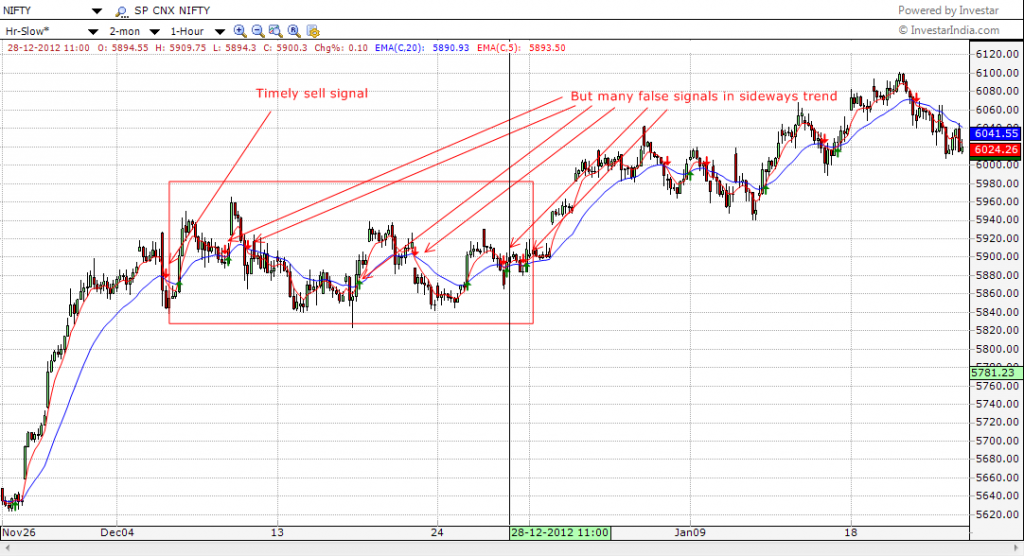 The above illustrations show that choosing indicator parameters is always a tradeoff between two goals of technical analysis:  1) Get timely signals 2) Minimize the false signals. So what are the best parameters to choose then? One should choose parameters that give the best compromise between the above two goals and this is not always easy to do by sticking to only one indicator.