What is a Moving Average?

Moving averages are trending indicators and are widely used because of their simplicity and effectiveness.They do not foresee price direction, yet rather define the current direction, though they lag due to being based on past prices.

Every type of moving average (commonly written as MA) is a mathematical outcome that is determined by averaging a number of past data points.A moving average helps smooth out price action by filtering out the “noise” from random short-term price fluctuations.

Here’s a chart with both an SMA and an EMA on it: 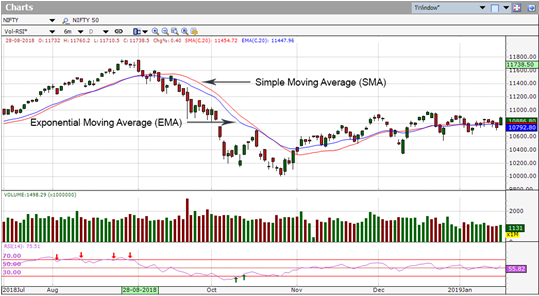 What is Simple Moving Average – SMA?

A Simple Moving Average (SMA), as the name proposes, is a moving average of the Closing Prices. SMA is the easiest and effortless moving average to use. It is just the normal average price over the specified period. The average is called “moving” because it is plotted on the chart bar by bar, shaping a line that moves along the chart as the average value changes.

Buy/Sell Signals are generated in SMA when: 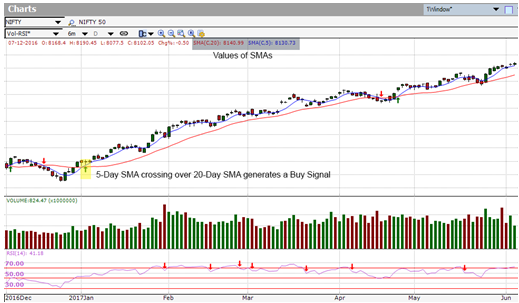 Above is a daily chart of Nifty. Throughout the uptrend, the 5-day SMA is above the 20 –day SMA. Hence it generates BUY signal when 5-day SMA crosses above 20-day SMA. 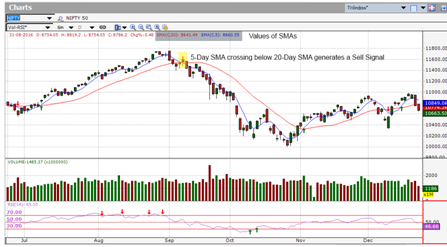 When 5-Day SMA is below 20-Day SMA, itis a downtrend and hence 5-day SMA crossing below 20-day SMA generates a Sell Signal.

Advantage of the SMA

What is Exponential Moving Average – EMA?

Exponential Moving Average (EMA) is similar to Simple Moving Average (SMA), evaluating trend direction over a period of time. However, on the one hand where SMA merely computes an average of price data, EMA gives more weight to data that is more current.

The similar rules are applied to SMA while interpreting EMA. Take into account that EMA is usually more sensitive to price movement. Generally, Exponential moving averages (EMA) give more weight to the most recent periods of time.

Here is a chart of Nifty. A 50-day SMA ( blue ) and a 50-day EMA ( red ) on nifty’s closing prices . Though both SMA and EMA are for a 50 day period, you can notice that the EMA is more reactive to the prices and hence it sticks closer to the price. 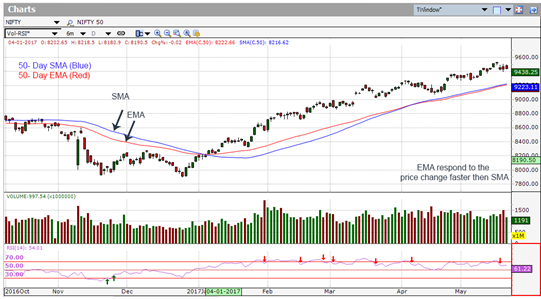 The EMA gives a higher weighting to recent prices, while the SMA doles out equivalent weighting to all values. This encourages the trader to take quicker trading decisions. Subsequently, hence, for this reason, traders prefer the use of the EMA over the SMA.

Advantage of the EMA

The Difference between the EMA and SMA

The real distinction between an exponential moving average and a simple moving average is an affectability each one demonstrates to changes in the data utilized in its calculation.

All the more explicitly, the EMA gives a higher weighting to recent prices, while the SMA assigns equal weighting to all values.

Whether you are using the 50-day, 100-day or 200-day moving average, the method of calculation and the manner in which the moving average is interpreted remain the same.

The red line represents the 200DMA for the close price. Here you can see how 200-day moving average acts as a Resistance from where we see a reversal.

Which Moving Average is More Effective?

Moving averages smooth out past price data as a result investors can more accurately observe the latest trend. They filter out the noise thereby making it much simpler to notice exactly what direction a market is heading.

The features of an EMA and SMA are in most cases equivalent, traders’ use EMAs and WMAs over SMAs if they are concerned that the consequences of lags in data might minimize the responsiveness of the moving average indicator.

Having said that, Moving Averages continue to be the most popular technical analysis indicator out on the market today.